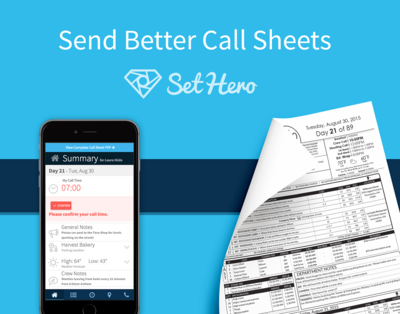 Create and send modern call sheets for film and television.

SetHero is a cloud-based tool that empowers filmmakers to build, send and track beautiful and professional call sheets.

Do you enjoy watching movies?  Most people do.  But what many people don't realize is how complicated producing a film can be: scripts must be broken down, schedules drafted, shot lists created, and so much more. Countless hours are wasted in Excel trying to keep information up-to-date.  The creativity of thousands of filmmakers is getting buried under the stress of production, with no clear path to a better way.

SetHero is here to save the day!  As a cloud-based software, SetHero takes the stress out of film production by allowing teams to easily build their daily schedules (i.e. call sheets) online and then publish those call sheets to cast and crew via email, text and print.  Filmmakers can track who has viewed and confirmed their call time, making follow-up a breeze!  No more endless formula wrangling in Excel or manual confirmation calls and texts -- SetHero empowers filmmakers to escape the stress of production, freeing them to focus on what they do best: making awesome movies.