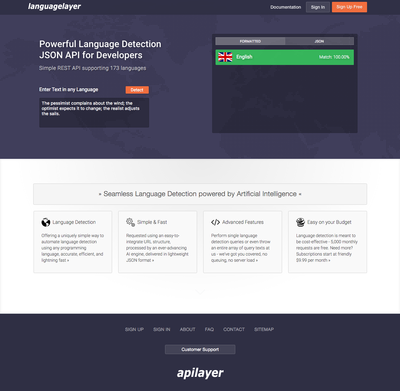 Languagelayer is a simple and powerful JSON REST API built to efficiently match text of any length to its corresponding language, cross-referencing single words, expressions and grammatical constructions, as well as taking into account any existing accents, dialects and other linguistic deviations.

The languagelayer API relies on an ever-advancing, powerful and AI-based (Artificial Intelligence) detection algorithm, which increases in complexity and performance with each language detection API request performed. Only this way the languagelayer service can be capable of processing over 170 different languages & accents worldwide.

In spite of its complexity behind the curtains, our language detection API continuously manages to stand out due to its easy-to-use REST interface, simple JSON response format, quick response time and low bandwidth consumption.